Portugal, Wales, Germany and France will contest the Semi Finals of Euro 2016. Some have progressed impressively and others not so much, let’s have a quick recap of the quarter finals:-

Portugal were the 1st team through with a penalty shootout defeat of Poland. An early goal gave hope of an open game but as soon as Sanches equalised that hope was diminished. What felt a long time later Ricardo Quaresma fired home the decisive kick. Somehow Portugal are in the Semi’s having not won a game in 90mins…Madness!

Wales, Wales, Wales what can you say? Their 1st tournament appearance since 1958 and a final appearance is within touching distance. They had the upper hand over Belgium in the qualifying group to get here and they carried that on in Lille with a come from behind 3-1 win. A long range drive from Nainggolan was cancelled out by Ashley Williams. Then a magnificent Cruyff turn from free agent Robson-Kanu had the Belgian defence baffled, he slotted home and a Vokes header sealed a famous win. Wales squad is littered with Englishmen and this will no doubt raised questions over selection policy at the English FA. 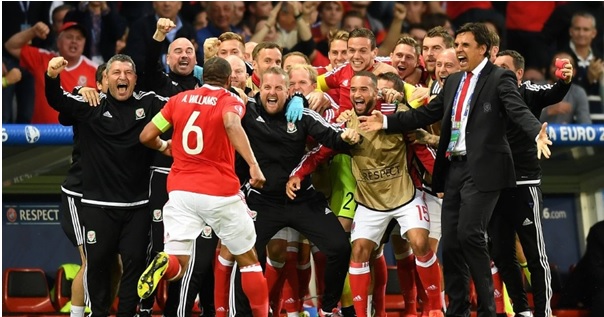 Moving to Saturday in Bordeaux and it was fair to say we anticipated a memorable encounter. We got one in the shape of some of the worst attempts from 12 yards you are ever likely to see, Zaza and Pelle hang your heads in shame. Before 6 misses from the 1st 10 kicks, we were then treated to a tactical 1-1. You got the feeling that these two superpowers had a mutual respect for each other and were happy for the tie to be decided in the way it was. Italy have gone home with huge credit from the neutrals and Chelsea fans can look forward to what Conte can bring them next season.

Finally it fell to the host nation to end a dream. France disposed of the heroic Icelanders with a 5-2 victory, goals from all of the French’s key men will also bode well for them. Iceland had shipped 4 before half time but refused to go home without leaving every bit of fight on that pitch. They battled to the end and we all applauded as the scored a 2nd late on to make the score line slightly more respectable.

Onward to the Semi Finals this week where we will see Ronaldo v Bale and World Champions v home favourites.

One final game in the Stade De France awaits for two of these nations on Sunday 10th July.

Who would bet against an Andy King double? The Leicester man has already picked up the Premier League title this season, can he now lift the Henri Delaunay trophy?

We’re delighted to announce that we have been chosen to be the dedicated Euro blogger for the cool clothing brand Xile Clothing. Based in Scotland, this edgy brand has 3 stores in (Edinburgh, Glasgow & Livingston) plus you can shop online at www.xileclothing.com.

Check out their blog (https://www.xileclothing.com/blog/)for all their latest news and trends and it would be awesome if you could support our blog posts on there too! ;-P